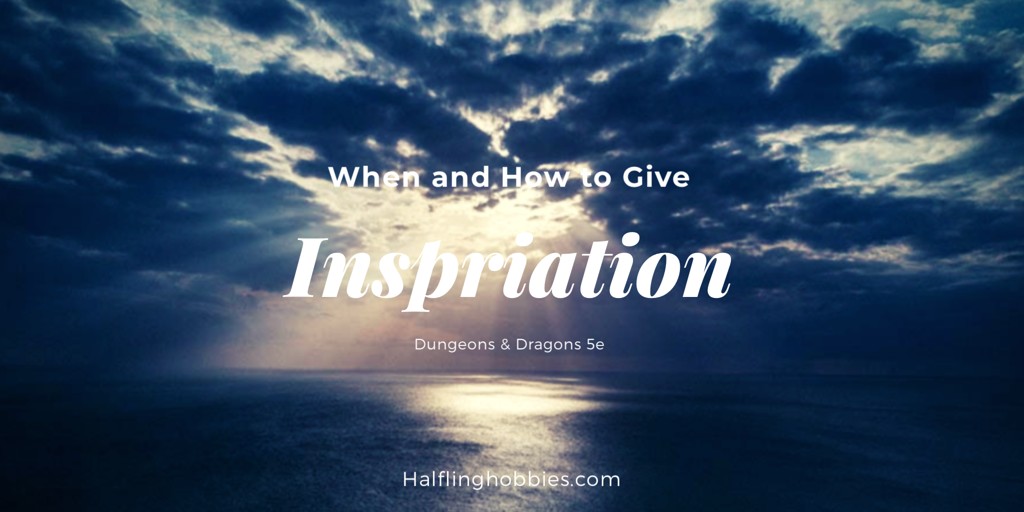 When players do something exceptional during game play, you naturally should want to reward them. Inspiration is a great way to encourage and reward creative game play and you, as a DM, should never be afraid of giving it out. When and how should you give out inspiration? Inspiration should be given as a reward to players when they play an aspect of the game exceptionally well. The Dungeon Master’s Guide suggests awarding inspiration to each player once per session of play. If you are like me, this may be a bit shocking and overwhelming. I have only ever received inspiration ONCE in my entire D&D player career! How am I supposed to give out that much inspiration without sounding like Oprah at Christmas? There are many reasons and ways to give inspiration to your players, but the inspiration system is also not for everyone. If it doesn’t feel right for your style, you can skip it without any fear of damaging your quality of play. Need a little inspiration of your own? Check out my Recommended Dice and Accessories page to get rolling with advantage!

Inspiration allows players to have advantage on one ability check, attack roll, or saving throw. Players are only allowed one point of inspiration at a time, they do not stack. Players can choose when they use their point of inspiration, or the DM can specify when the players have inspiration on a roll. Inspiration can turn the tide of battle or make the difference between ending up in jail or with a token of favor from a noble. A single roll has a huge amount of importance in D&D, and inspiration is one way players can have an advantage.

When to Award Inspiration

As the DM, typically it is your job to determine if a player should be awarded inspiration or not. Players should be awarded inspiration if they have done something to make the game more interesting, entertaining or enjoyable for everyone. You can choose to either award inspiration after the action or conversation is completed, before the action when the character has a choice, or while the player is performing the action. Most DMs wait until after the action is complete to award inspiration so they do not interrupt the flow of the game. After the player has finished a creative and off-the-wall attack, you can say, “As the monster falls before you, you feel your god smiling upon your act of valor. You are awarded one inspiration point.” The player can then choose when to use the point of inspiration during another encounter. Other DMs prefer to have the inspiration earned to remain within the same context. For this same player, this would mean that when they are about to roll their attack, you could say, “As you prepare your weapon and charge forward, you feel your god smiling upon you, you have advantage on your next attack.” This method directly ties the inspirational action to the result, advantage, preventing players from using combat inspiration for conversational advantage. The last option for when to award Inspiration is before any action has taken place. This option is for those group who are focusing on a genre or story type in which sticking to the genre grants inspiration. An example could be granting inspiration for choosing options that align with character flaws and traits. By giving players options and telling them which ones will give inspiration, you can ensure players stick to their character traits. Most DMs, especially those just starting out, will often wait to award inspiration until after the action is complete and let the player decide how they want to use it. But any of the three methods are acceptable and depends on your style of play and campaign. The key is to use inspiration to recognize exceptional play and encourage players to stay engaged.

Dungeon Master’s aren’t the only ones who can award inspiration. If you find your often forget to give inspiration because you are trying to keep track of so much at once, you can delegate this task to your players. An alternative to DM awarded inspiration is allow each player to award one point to inspiration to another player throughout the session based on a set of guidelines you come up with together. This method both frees the DM and keeps the players engaged. If they know they can award inspiration, they will be on the look out for opportunities to do so. This method, however, only works well with party’s who are invested and interested in the story. If your group is just looking to maximize advantage rolls, then this method may not be right for you. Whether you or your players are awarding inspiration, there are several reasons why a player might earn inspiration.

A common reason for awarding inspiration is for exception role play. Players that try to embody their character deserve recognition and a point of inspiration is a good way to do just that. Please note that role playing a character is not synonymous with voice acting. A player can play their character well regardless of if they can do an accent or not. Role play is about knowing how their character would act in different situations, or what they might say. A peasant in a noble’s court might act extremely nervous, for example. This is a great example of role playing a character well that has nothing to do with voice. Role play also means interactions between other players and NPCs. Players should be awarded inspiration for role play conversations that deepen bonds, or for befriending an NPC. A player might also earn inspiration through an especially witty or funny insult, one-liner, or comeback. Feel free to award inspiration for all these aspects of role play.

Heroism is defined as a great act of bravery, often at great personal sacrifice. When you see your players making a sacrifice for the party or for others, you should definitely give them inspiration! Becoming heroes is at the heart of D&D, and players should be rewarded for their self-sacrifice along that journey. It is important to remember that not all acts of heroism are combat related. When a character consciously makes the choice to help others over themselves, especially when it is against their nature, that is a heroic act. A miserly character that gives a gold piece to a street urchin or a solider who doesn’t turn in a peasant for stealing to feed his family, these are also acts of heroism that deserve to be rewarded.

Inspiration for Victory’s and Reaching Goals

Other DMs choose instead to award inspiration to everyone in the group when they have completed a goal or won an important victory. Instead of giving inspiration from session to session, it is awarded only once a major milestone has been accomplished. This method of awarding inspiration serves to makes the reward feel more special. Instead of getting inspiration every week, it only happens once every 3-4 sessions. Of course, if you want to both give inspiration for game play and victories, you can do that as well. It doesn’t have to be either or.

Inspiration is tracked by the players on their player character sheets. He or she can simply mark their sheet whether or not they have inspiration and can use it when they want. Alternatively, you can give players a special inspiration token. You can use poker chips, special d20s, or even a token you create for your campaign. This isn’t necessary, but it can be fun, and having a physical object can help players remember they have inspiration to use. When the player spends the inspiration, they hand the token back to you.

Some DMs don’t like to use the inspiration system, and that’s okay too. Some feel that role play and heroism are rewards themselves, and shouldn’t be overshadowed by inspiration. Others feel that inspiration adds too much meta-gaming and invitational “point hunting” that makes the game feel unnatural or forced. If you don’t feel comfortable with inspiration or don’t like the idea of “bribing” your players, then simply ignore it all together. Ignoring inspiration won’t hurt your game in the slightest. Feel free to play with inspiration in your game and see how your players react. If your group goes nuts over it, keep dishing it out. If it doesn’t seem to have any impact, maybe ignore it for this group. Everyone is different, I love it, my husband hates it! And that’s okay. Choose what works best for you. Until next time, May your game have advantage, my friends, -Halfling Hannah

What are some alternatives to Inspiration? If you want to reward your players for excellent game play but you don’t want to use the inspiration system, you can reward them in-game. Some options might include: What are some ideas for awarding inspiration? Inspiration should always feel like it fits in game. Try using the following phrases to award inspiration: