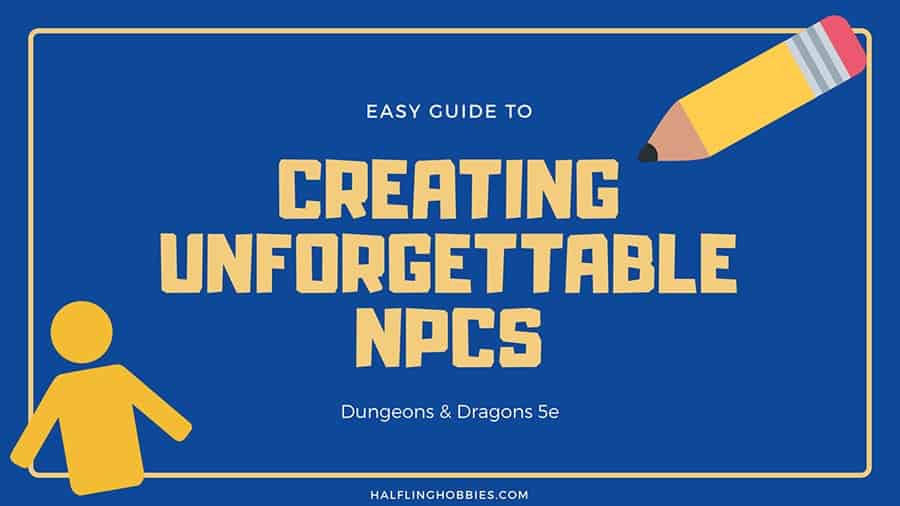 What makes an NPC (Non-Player Character) unforgettable? What keeps players coming back to the same shopkeeper over and over? Regardless of the race, gender or setting, there are a few qualities that make NPCs stand out as a cut above the rest. If you want to make your NPC interactions more memorable, follow this simple guideline to learn how.

Why does the party need to interact with this NPC? Does this NPC make a potion or magical item the party can’t get anywhere else? Or is this NPC the holder of important information? Don’t be afraid to make items, potions, information of quests available only at one shop or through one contact. (You can even make meeting this NPC for the first time a side quest!) If the party knows the only way to get what they want is to deal with a specific NPC, you can be certain they will remember his/her name.

Side note: Remember, not all shops are equal. While some herb shops might sell herbalism kits or low-level potions, but a specialized potions shop will deal in potions of superior healing (more likely what your party is after). Don’t waste your best NPC ideas on places your party likely will never visit again. Give superior shops superior NCPs.

There is a difference between this description:

“You walk into the shop and see a gnome behind a short counter.”

“You duck into the small, cozy shop and see the front counter has been lowered to fit the height of a female gnome. Her skin is a dark walnut brown and she has wild red hair that flows behind her as she moves rapidly back and forth shelving items. Now and then she climbs nimbly up the case that extends from the floor to the ceiling to put an item on a higher shelf. She moves with such nimble speed that her movements are almost a blur as she works. You catch her attention and she stops halfway up the shelves, smiling broadly.”

The second description not only gives your players a physical description of the shopkeeper but personality hints as well. When she talks, I would picture this NPC stumbling over her words because she speaks so quickly. Maybe she gets off topic often or asks too many questions in quick succession.

Obviously, not every NPC needs this kind of introduction, but throwing them in occasionally will add interest and make NPCs more memorable.

This is especially important if you have a side quest in mind for your NPC. Giving a detailed description slows down the game and alerts the players that there might be more to this individual than meets the eye. Also, be sure to throw in hints if there is an item this shopkeeper has on display that the party might find useful or interesting or if an NPC might but up to something secretive or underhanded. Descriptions such as, “You see his eyes darting back and forth, scanning the area suspiciously.” Drop the subtle hint to your party that this guy may be up to no good. Descriptions like this make the NPC more memorable because they include an element of drama and mystery.

Whenever possible, make the environment surrounding your NPCs come alive by using as many sensory details as possible. What would the party smell when entering an herbalist shop? What would the air feel like if they ducked into a cellar or entered a warm room on a cold night? Is there music playing in the tavern? If so, what is it like? Our brains work in sensory details, the more you provide, the more memorable your NPCs will be.

No one is perfect, and your NPCs shouldn’t be either. Perfect people are plain. To make your NPCs truly unforgettable, give them flaws. Character flaws can be as innocent as speaking too quickly, such as the example above, or deep, definitive flaws, such as running an underground criminal organization or selling potentially deadly drugs. The flaw depends on the NPC and your purpose.

Note that flaws can even become epic side quests if played well. Players may be so intrigued by the effectiveness of potions sold at a particular shop, that they follow the shopkeeper to learn the “secret ingredient.” Or a greedy NPC can even become a low-level villain or a suspect in a crime which occurs against their competitor.

However harmless the flaw, simply having one will make the NPC stand out in your players’ minds. Check out the list of flaws below if you need ideas!

Using one or more of these flaws will add both flavor and intrigue to your NPCs making them unforgettable.

When memories are associated with an emotion, they are much more quickly cemented in long term memory. If you can find a way to connect your NPC emotionally to your players, it is very likely the party will remember them. However, you should keep in mind that there is a vast array of emotions your players could feel. Here are some examples:

Pity– An NPC could be suffering from an illness or dealing with the loss of a loved one. The NPC could alternatively be losing business to a competitor who is sabotaging/limiting his/her supplies.

Happiness– The NPC is bubbly and happy creating the same emotions in the players. His/her tavern/home is full of fun gadgets, pets, or other items that the party enjoys

Irritation– This can come in any number of ways. Perhaps they talk too slowly or too quickly. He/she could ignore certain members of the group and focus only on one member they like. Or they can be too loud or mumble. Giving your NPC annoying traits will help them stick out. And if you think this will make the party never want to see him/her, think again. There will always be one person that loves to watch everyone else get annoyed with that NPC. Trust me. (It’s me. I’m the person.)

Hate– Who says your players need to love every NPC you throw at them? Hate is a powerful emotion, and it is one I love to use (though make sure you use it sparingly). For example, the Captain of the Guard who keeps stealing the party’s glory. Or, my personal favorite, the slimy jack-of-all-trades shopkeeper who sells faulty items 30% of the time.

Bringing it all Together

The best way to make your NPCs unforgettable is to give them relevance and purpose by treating them like real people.

If the NPCs don’t appear to have any relevance to the story, your players will feel that interacting with them is a waste of time and simply ignore them. Give all your NPCs purpose. Make that purpose simple, like protecting a grove, providing for their family, or keeping order, but give them purpose, nonetheless.

This does NOT mean every NPC has a fully fleshed out backstory, but it does mean you have several options on hand in case your players dig a little deeper. If players want to cure an NPC’s illness, make sure you have a disease and cure in mind. Even random characters can feel like they have purpose and relevance just by using the tips I have outlined above.

Unforgettable NPCs are just one way to step up the level of your game, and I hope these tips will help you get there.

May your game have advantage, my friends!