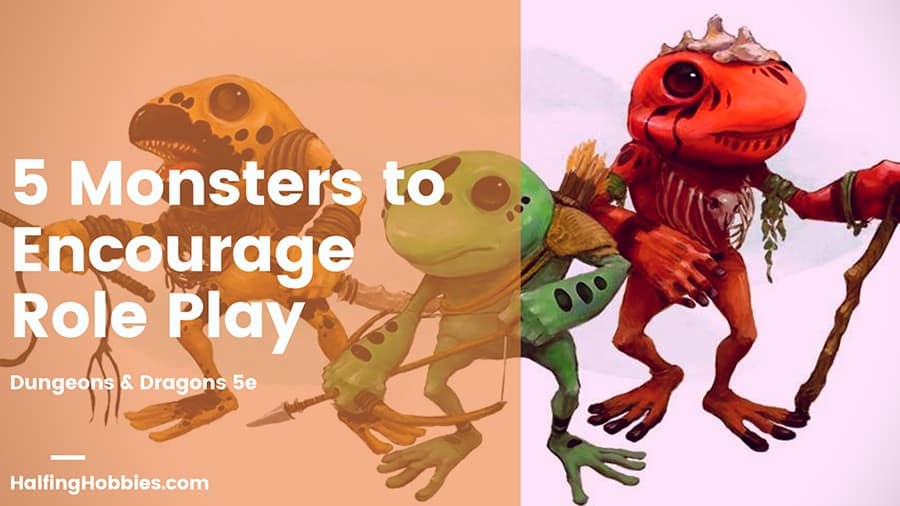 The world of Dungeons & Dragons can be a terrifying place for novice and veteran players alike. It is filled with monstrosities and evils of all kinds. Some creatures resemble wild animals, while others look like they were born straight from a nightmare (looking at you Gibbering Mouth). But the world your players encounter doesn’t have to be solely terrifying. It might surprise you to know that there are some inhabitants of the nine realms with whom your party just might fall in love! Here are 5 underused monsters to use in your campaign to add depth, role-playing opportunities, and intrigue to your next adventure.

If you think all dragons are evil, greedy, and murderous, then you haven’t met this little guy! Colorful butterfly wings attached to a cat-sized, magical dragon, who loves a good practical joke? Sounds like a recipe for role play!

As the Faerie Dragon ages, it changes colors, moving through all the colors of the rainbow, and gains new spellcasting abilities with each color change. Unlike its larger cousin, the Faerie Dragon doesn’t plunder or cause mass destruction and pain in its wake; this little guy simply wants to have a little fun, at your expense!

When wanderers happen by its forest home, the Faerie Dragon turns invisible and plays pranks and tricks on its unsuspecting victims. These pranks are harmless (mostly), and the Faerie Dragon will often even reveal itself after it has had its fun, as long as the subjects aren’t too angry.

Faerie Dragons do share one trait in common with the larger variety of dragons: a propensity towards treasure. Faerie Dragons are easily enticed to guide travelers or to provide safe passage through their homelands by the promise of baubles, sweets, or other trinkets.

Don’t get me wrong, forests can, and should be, dangerous places as all kinds of monsters dwell in the forest. But, it might be a nice change of pace to encounter a trickster, rather than a real threat, especially if the party has just been through a series of rough combats.

Try it out and have some fun! The great thing about encountering a Faerie Dragon is that anything can happen!

The Underdark is, arguably, the most terrifying terrain in Dungeons & Dragons. This pitch-black world will easily overwhelm outsiders of any level or experience. Mind flayers, Aboleths, Intelligence Devours, and many other evil creatures reside and hunt in the Underdark. But thriving in this harsh environment are underground hippies called Myconids.

These colorful, peaceful fungi live in communities called “circles.“ They are intelligent, can move and speak, and seek peace above all else. Deploring violence, they are happy to provide shelter and safe passage through their territory to travelers.

But, here is where things get psychedelic. Myconids see “the meld” as their one purpose in life. During a meld, all the Myconids in the circle come together and share one consciousness, thanks to special spores they naturally secrete. They then release hallucination spores and share a dream. This ritual is all about community and entertainment and the dream serves to lift them out of the dreary world in which they live.

However, as peaceful as these fungi are, they are still fungi. They decompose dead creatures and can even reanimate corpses, turning them into spore servants.

Another resident of the Underdark, Flumphs are, in my opinion, the most interesting monsters in D&D. They resemble floating jellyfish with tentacles hanging below the Flumph’s body and two eye stocks protruding from its top. Unlike the mindless jellyfish, Flumphs are highly intelligent beings. They are wise and have advanced knowledge of religion, philosophy, mathematics, and countless other subjects.

Much like a monster mood-ring, Flumphs change colors based on their emotions. Soft pink means the Flumph is amused. Deep blue means sadness, green means curiosity, and crimson, anger.

Flumphs live in peaceful, utopian communities that have no need for leaders or rulers and they communicate through telepathy and Flumphs can sense all telepathy and will even seek out creatures who have good thoughts.

Unlike just about every other creature in the Underdark, Flumphs do not kill or feed on flesh. Instead, they feed on psychic energy, but only what they need, and creatures do not feel any discomfort from such feedings. Flumphs are often found near Mind Flayer communities where they are treated like harmless parasites.

If your party is deviling into the secrets of the Underdark, they know they will encounter dangerous and evil creatures. They are expecting Aboleths, and ancient evils, so why not Flumph it up a little? Before encountering the deadly Mind Flayer city, have them spend some time in a Flumph community. This could provide a great opportunity for role play, as well as give the party useful information they might not otherwise have discovered.

A high-level wizard or sorcerer can mix clay and a little blood to (sometimes) create a new best friend. The appearance of the Homunculus depends on the will of the creator, meaning this monster can take the shape of whatever you want.

Homunculus have a strong connection to their master, sensing, feeling, and experiencing everything in unison with him/her, even from long distances. The Homunculus’s alignment entirely depends on their creator and when the master dies, so does the Homunculus.

Homunculus are extensions of their masters and can share thoughts with them, making a good homunculus a trusted ally, and an evil one an undetectable spy.

But what the Grungs lack in size, they make up for in cruelty.

Grungs think of themselves as far superior to other creatures and will attempt to enslave any other creature they come across. In order to keep the slaves under control (Grungs are small, after all) they constantly keep captured creatures poisoned with a toxin they secrete from their skin.  After long term exposure to this toxin, the slave will become a husk of its former self, only being restored through magic or a wish.

Grung society uses a caste system in which each color of the Grung’s skin represents a caste. The color of Grung also determines the poison effect a creature suffers after touching a Grung or after being hit by a  poisoned Grung weapon. Poison effects range from paralysis (green) to being charmed (gold).

*See the Monster Manual for a full list of poison effects

These human-size walking trees rarely talk. They silently guard forests and areas of supernatural beauty, and often follow Treants and other creatures with a strong connection to nature.

You might never guess that these seemingly harmless creatures are the product of a dark ritual.

Powerful Druids remove a victim’s heart(while they are still alive) and place a seed inside it. The heart is then planted in the hollow of a tree which is watered with the blood of the sacrificed person. After three days, a sprout forms and quickly grows into a Wood Woad who will ceaselessly follow the orders of the one who created it.

A Wood Woad is immortal and does not require anything other than earth and sunlight to live. This means that Wood Woads often outlive their original purpose. When this happens, Wood Woads have been known to go looking for a new purpose, following creatures with a powerful connection to nature.

Your game will certainly have high-level villains and monsters to fight, but by using some lesser-known and more role play designed creatures, your campaign can begin to feel more like life and less like just a game. The next time you are looking for something for your party to encounter, I hope you will try one of these monsters, I am sure you will not be disappointed!

May your game have advantage, my friends!